(*Products listed at bottom after description and sizing guide.)

We contend that The Safepacker is the best, most versatile, and truly utilitarian holster in the world. With its low-profile, unconventional looks, you could call it the "un-holster". Possibly the most usable gun case ever made, it allows you to keep your sidearm and ammunition ready to grab and go at all times – and that's just the beginning of its abilities!

The Safepacker Holster comes in many sizes to fit virtually all common handguns. It is available in both right-hand and wrong-hand (okay, left-hand -- our president Ralph is a leftie and likes to joke about it) versions. Constructed of tough Cordura nylon and thick closed-cell neoprene padding, the Safepacker was originally designed to completely protect a firearm and its reload for armed mountain rescue teams whose equipment received very hard use in rocky, dusty and sometimes rain-soaked environments.

• Right-hand denotes a right-handed shooter, left-hand a left-handed shooter. The Safepacker is hand-carried in the support-side hand and accessed with the dominant hand.

• Frame-mounted lasers forward of the trigger guard may cause interference with the stitch line that divides the muzzle pocket from the spare magazine pocket. We have seen the fitting problem in smaller pistols, but have not seen it yet in larger pistols as the stitch line in the larger Safepackers was previously moved to better accommodate some frame-mounted white lights. Our Mini-9 Safepacker was designed with a modified stitch line to solve this issue for smaller pistols.

• Due to the enclosed design of the Safepacker holster, Frame-mounted lasers with cross-bolt activation switches may be inadvertently activated during handling of the case. We do not recommend the Safepacker for firearms using this activation mechanism.

• Safepackers are sized for use with magazines using standard factory floorplates. Extended floorplates for added capacity or finger extensions (most common on Glocks) may not fit properly in the standard size. When possible, we have checked the modified size and list which Safepacker is appropriate below.

If the weaponlight increases the overall length of the firearm you will need to choose the next longer size Safepacker to fit with the light mounted. Standard-size plastic floorplates/bumper pads on Wilson, Les Baer and McCormick 1911 magazines fit with no problem.

WARNING: Mishandling of firearms may cause serious injury or death. Before practicing with your product, make sure your weapon is unloaded and pointed in a safe direction. Study how it attaches and how it will move when in use. If the product interferes with the safe operation or handling of the weapon, discontinue use. For further safety considerations, consult the owner's manual of your weapon and seek professional assistance.

The pistol is secured by friction, the flap, and the securing buckle. The internal pouch area is bisected by a stitch line that creates a muzzle-side and a magazine side. We have adjusted this divider to allow many autos to fit with SureFire X200/300, Insight M3/M3X or Streamlight TLR1/*TLR2 lights in-place (*we have been told the TLR2 light-laser combo works, but we have not been able to test it ourselves; the M6/M6X/X400 light-laser combo versions do not fit due to their added height). Please note that if the weaponlight increases the overall length of the firearm you will need to choose the next longer size Safepacker to fit with the light mounted. This is very common with 4" or shorter barreled handguns. On the muzzle side you will see the Velcro-closure speedcut that opens during the draw, allowing the Safepacker to bellow out for a full firing grip, and allowing the muzzle to very quickly clear the holster. When this speed cut is closed the Safepacker is snug around the gun and magazines. Everything stays properly oriented for fast, reliable access.

How would you like to reclaim all that off-side belt space taken up by spare mag carriers? Or, would you just like to carry one or two more reloads with no tradeoffs in space or bulk? The Safepacker can help. The compartment below the firearm's grip area is for spare ammunition; one wide high-capacity (9mm, .40 S, .357 Sig, .45GAP, .45ACP) or two single-column magazines (.45ACP, .38 Super, etc.) can be carried. Some prefer to carry a lone single-column mag for weight savings. Depending upon model/caliber, one or two 5- or 6-shot revolver speedloaders can typically be stacked in this pocket (*most large .44-.50 caliber speedloaders are too large in diameter and will not fit; we recommend Tuff Products QuickStrips as an alternative that should fit). When the proper size Safepacker is used for the gun, this still allows a full-firing-grip.

The inner core of closed-cell neoprene padding serves several purposes. First, it protects the firearm from damage, the original goal when testing with mountain rescue units. The padding eventually molds on the inside to the weapon, but more importantly, it prevents the weapon's shape from printing through the case on the outside. It also gives the case positive buoyancy when empty (but not generally when a gun is inside, with the possible exception of a Scandium alloy J-frame we are told – must be a good story there!).

The protective flap has a hidden side-access flat document compartment with a hook-and-loop closure. People have chosen to carry everything from checkbooks to grocery lists in this pocket. It can be accessed without opening the flap to reveal the gun compartment. The flap is secured with an adjustable strap using a Delrin buckle that is fast and simple to open under stress. In an emergency, or if you just want to carry as much ammo as possible, more semiauto magazines can be carried inside of the protective flap's hidden pocket (however, this can get very bulky and isn't generally recommended).

The wide reinforced belt loop on the back wraps around the front and secures with hook-and-loop fasteners beneath the flap. This allows easy-on/easy-off convenience with complete security. There is no metal hardware to rust, make noise, or dig into you. Our system also allows itself to be attached to almost anything, including our specialty briefcases, PackerBacker and Runner's Pack.

The back of the Safepacker, detailing the generously wide, reinforced belt loop.

The Safepacker attaches quickly to your seatbelt when you get into your car.

While the seatbelt and contoured seats can trap your sidearm in its belt holster, the Safepacker is readily accessible. While attached to the seatbelt, it also secures the weapon in case of an accident.

Other creative and handy spots are on your seatbelt, on very wide and thick backpack hip belts, even boat gunwales or wheelchairs. At the end of the day it can go on the side of your bed with the flap closure sandwiched between mattress and box spring where is is accessible and discreetly covered by the bedsheets. All without ever having to handle or expose the weapon.

There is a retention strap on top for secure carry in the offhand, ready to present the weapon in an instant. The right-hand version refers to a right-handed shooter, left-hand for a left-handed shooter. This is very popular here in Arizona with concealed carry permit holders as it looks like anything but a firearm holster and allows you to dress for 115ºF weather. Its chameleon-like quality also helps when the element of surprise may give you a life-saving extra second to respond. Testing has shown that people generally focus on the Safepacker with some confusion during the drawstroke, rather than the weapon being revealed. This effect has been verified in at least one real-world event by the surviving operator whose action beat the odds against two attackers with drawn weapons. You can attach the optional shoulder strap to the built-in Delrin D-rings for a bedside security package of gun and ammo that you can throw on over your pajamas. In addition, we have added an extra stitch line across the adjustment strap on the outside of the flap specifically to allow SureFire lights with pocket clips to be attached for bedside use. The two D-rings on top are also used to carry keys on a small utility carabiner (*current color is actually polished natural aluminum) now included as a free accessory! Along with acting as a distraction, keeping your keys attached helps you remember to always have your Safepacker (and its important cargo) with you. The options are only limited by your imagination.

Oh, and of course, you can put it on your belt too.

*Note that on the bottom of the case is a stitch line that should appear to be loose. It should be. It has no further purpose. It's called a folding stitch and it's on our Safepackers and Smartphone Case. The stitch allows a very neat fold with no wrinkles. So just ignore it. We could take it out after it's made but would add $$$ to your cost. -- The Wilderness 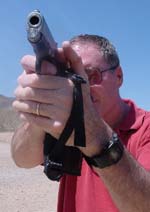 In an emergency the flap pocket can also be used to hold 3 spare single-column magazines, or 1-2 high capacity magazines. While this can become quite thick and heavy and isn't generally recommended, it is good to know.

The Safepacker can be carried as a clutch or man's wallet for very low-profile concealed carry in an urban environment. A money clip, checkbook or spare keys can be kept in the hidden side-entry pocket on the flap and accessed without ever revealing the weapon.

Presentation from the belt-mounted Safepacker

The business end after drawing from the Safepacker (at right). The case can either be retained in the hand, thereby retaining spare ammunition, or easily dropped from the carrying hand.

The optional Safepacker shoulder strap gives you a hands-free package you can throw on over pajamas. In an emergency you now have a firearm, reloads, your Sure-Fire clip flashlight or maybe a cell phone clipped on the outside – not to mention a place to reholster your weapon after a potential emergency is resolved.

"About halfway through my 15-year career as a high-angle mountain rescue operation leader for the Maricopa County (Arizona) Sheriff's Office Mountain Rescue Team, I had witnessed problems with Mountain Rescuers being armed. Standard holsters would allow damage to weapons and in some cases allow the gun to fall out. Keeping the weapon in a rescue pack didn't work because of the slow acquisition and occasional separation of the pack from the climber.

I have witnessed a Safepacker save a man's life." 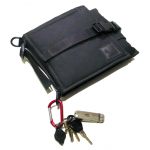 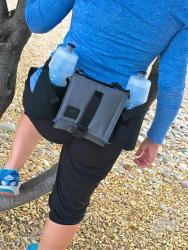 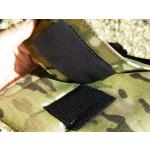 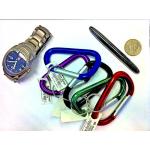 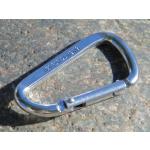 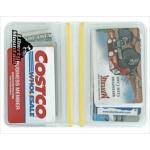 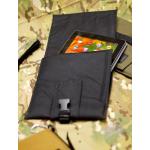