We are the only manufacturer licensed by the late Eric Ching, and later his estate, to produce a nylon version of his acclaimed Ching Sling. Designed by Eric in the testing cauldron of Gunsite, the Ching Sling is not only the traditional scout rifle sling, it's an all-around excellent shooting/carry sling on full-size rifles and carbines.

The Ching Sling specifically aids stability by tensioning the rifle against the support arm. Unlike typical military-style shooting slings, though, the Ching Slingis lightweight nylon, impervious to rot, available in low-profile colors and is fast to get into and out of. While the tactical precision rifle will often be used prone off of a bipod, there are cases where intervening cover or up/down angles force the shooter to use an unsupported position. This is even more likely in hunting situations, especially in open terrain where kneeling, squatting, or sitting may be the only way to get more stable while keeping line-of-sight above grass and rocks. It can still be used as a conventional carry sling, of course. Comes with instructions for proper use. 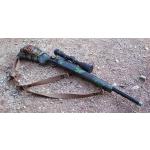